Calls for the Mobilization of Hindus to forcefully respond in Bengal

Gorakhpur, Uttar Pradesh - In an attempt to link Hindu Forces fighting for the Hindu cause across the Northern and Eastern Plains of India and in the backdrop of the awe-inspiring Mandir dedicated to Bhagwan Gorakshnath, Tapan Ghosh, the president of Hindu Samhati, met and received the blessings of Mahant Avaidyanathji Maharaj, the Peethadeeshwar of the Gorakshnath Peeth and Gorakhpur MP Mahant Yogi Aditynathji as well as apprised both of these important leaders of Hindu society of the grave and rapidly deteriorating situation of Hindus in West Bengal as well as presenting the ever expanding activities of Hindu Samhati to combat these alarming developments that confront the Hindus of West Bengal. Ghosh was in Gorakhpur on the specific occasion of the Shraddanjali Sabha dedicated to the legendary Mahant Digivjaynathji Maharaj, who played a pivotal in mobilizing and uniting Hindus from all backgrounds both in his role as the Peetadeeshwar of the Gorakshnath Peetha as well as the leader of the Hindu Mahasabha.

In the beginning of the meeting, Tapan Ghosh received the blessings and encouragement of the Peetadeeshwar of the Gorakshnath Math, Pujiya Mahant Avaidyanathji, who exhorted Ghosh and all present to mobilize Hindus in Bengal as well as across the whole of India. Yogi Adityanthji asked in a rhetorical and reflective manner that what has happened to the land of Bengal which has given such giants of Hindu society such as Sri Aurobindo, Shyama Prasad Mookerjee, Rabindranath Tagore, Bankim Chandra Chattopadhyay, Swami Viekananda, and so many others is the place that the center of anti-Hindu activities as well as is one the areas where Hindu society faces the most serious threats to its existence. Yogiji further stated that this situation is due primarily to a severe lack of awareness of their basic Hindu identity. Ghosh made a emphatic statement that Bengal is very quickly headed for another partition, to which Yogiji further added that Hindus across the Indian subcontinent are facing serious threats to their identity. Ghosh then presented the latest edition of the monthly paper published by Hindu Samhati, whose main story was the recent atrocities on the Hindu community in Deganga. Tapanji went on to show Hindu Samhati’s response and protests to the atrocities committed by the Muslim community in Deganga. Yogi Adityanthji expressed his deep concern and assured his full support to stand up for the Hindus of Bengal.

After being shown a detailed presentation on both the serious challenges confronting Hindus as well as Hindu Samhati’s activities in protecting Hindus, Pujiya Yogiji said in order to prevent such activities, Hindus must immediately respond in any way possible, otherwise in the next five to ten years Hindus will be completely defeated and Muslim rule will be established. Pujiya Yogiji then talked specifically of the geographical belt across northern and eastern India stretching from Delhi to Bengal, saying that this is the most challenging areas for Hindus. Ghosh responded to this assertion by saying that as Gorakhpur falls in the middle of this georgraphic region, Pujiya Maharajji is in an unique position of being a forceful advocate for the Hindus across not only this region but all over the Indian subcontinent. Additionally Pujiya Maharajji, said that the activities of Hindu Samhati will help tremendously in combating the challenges faced by Hindus and urged more such activities from Hindu Samhati in the future. Yogiji then called for Hindus to be mobilized over all twenty districts of Bengal, and urged Hindu Samhati to take up this gigantic responsibility.

Along with formulating methods of working in tandem, Pujiya Yogiji made invaluable suggestions on how to strengthen the work of Hindu Samhati by telling his experiences in mobilizing Hindus in the Purvanchal regions from the enormous threats faced by Hindus from Islamic extremists in places such as Azamgarh, Mau, Deoria, Maharajganj, and Siddarthnagar. Pujiya Yogiji outlined the manner in which Hindus were organized in these regions. Ghosh presented a formal invitation to Yogi Adityanathji to come to Kolkata and to speak at the events of Hindu Samhati. Yogi Adityanthji said that whenever he comes to Bengal, he will do his utmost to assist Hindu Samhati in their endeavors. At the end of the meeting Yogi Adityanth bestowed his blessings on Tapanda and all present as well as blessed and praised the work of Hindu Samhati, by saying that this is the need of the hour and called for the expansion of Hindu Samhati. 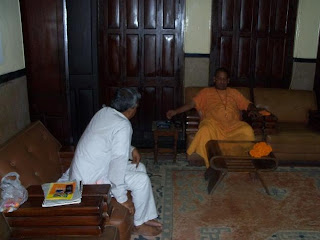 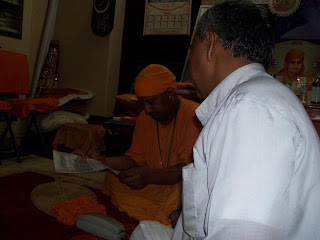 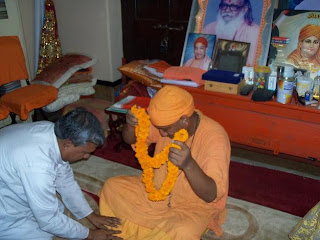 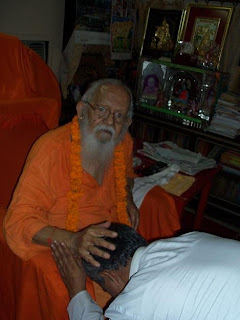