The partition of  was based on the premise that a Bengali Muslim would be able to identify with the sorrows and issues of a Punjabi Muslim more than a Bengali Hindu.

Of course, that was a vicious and diabolic notion because I believe that culture and heritage stand above religion.

I recently visited the dilapidated temples and gurdwaras of and realised that the city still sings of her secular past.

In the early 19th century, the British made  the central seat of military power as they aimed towards . This was in line with their strategic approach towards the Russian Empire in order to enjoy and retain complete control over central .

Known as the Great Game, the conflict continues today in another form.

After the partition in 1947, continued to be the general headquarters of the army. But Pindi has a lot more to tell than just it’s military tales. The city is known for its heritage and culture. Its multi-religious character changed when almost all of its Hindu and Sikh inhabitants left for . Sixty five years after partition, I went looking for their temples and Gurudwaras.

There are about ten dilapidated temples and Gurdwaras which are no longer functional. One temple located at Kohati Bazaar is in good condition. Its premises are used as a government school for disabled children.

Another beautiful Gurdwara known as Bagh Sardaraan is used by the Punjab Police as their main office.

The temple located at is used as a scrap yard. A Shiva temple at Gunjmandi now houses storerooms or shops. There are a few more abandoned temples scattered around College Road, Bohar Bazaar, Purana Qilla, Bagh Sardaraan and then some on the outskirts of Rawalpindi which are about to collapse, or so it seems!

In the old area of Lunda Bazaar, there used to be three temples, a Gurdwara, a and many Havelis belonging to the Hindus and Sikhs of the time. Of the three temples, two have survived. The third, of goddess Kali in the main bazaar, no longer exists. It has been converted into living quarters and extensions have been made, thus changing the original structure entirely.

In Lunda bazaar, there is a tall structure of a temple known as Mohan Mandir. This temple is believed to have been built by two Hindu Hakims in 1930, Hakim Asa Anand and Hakim Moti Ram.

It is sad that even though there are so many abandoned temples in and , there is not a single place for the Hindus living in the twin cities to celebrate their festivals like diwali, shivratri or holi.

There are more than 25,000 Hindus living in and . Some of them have migrated from other parts of , mainly from Sindh.

Recently, following a request from Ramesh Lal, a Hindu parliamentarian of the ruling Pakistan People’s Party, Prime Minister Raja Pervez issued a directive to the chairman of the Capital Development Authority to build a new temple for the Hindu community.

That is undoubtedly a good gesture, however, the government must also urgently restore and preserve the old heritage of the city- if not for the sake of the minorities still prevalent in our country then at least for the sake of history and heritage. 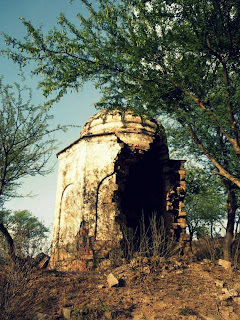 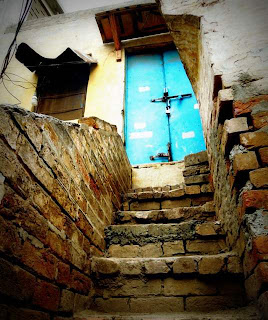 (The entrance to a Temple in Gunjmandi) 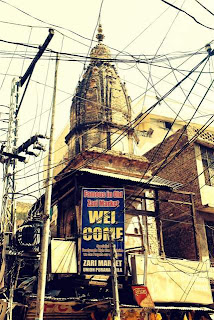 (Purana-Qilla-Temple)
Posted by Unknown at 3:09 AM