Contravening any other alternative, Kanchi Sankaracharya Jayendra Saraswathi made it clear that enormous treasures, worth Rs.100000 crores, as found in Sree Padmanabhaswamy temple in Thiruvananthapuram, were the "exclusive property" of Travancore royal family that dedicated their kingdom to the presiding deity of the temple.

"For long the erstwhile royal family was the custodian of the temple and they dedicated their kingdom to Lord Sree Padmanabhaswamy.The treasures were offerings made by erstwhile rulers to the temple, hence the recoveries belonged to the royal family", he told PTI.

"However, the treasures should be kept in the temple cellars itself", he said.

The cellars of the temple, closed for several decades, were ordered to be opened by the Supreme Court to prepare inventory while considering a private petition recently.

It is to be noted, venerated deity of is the family deity of Travancore royal family as well. Members of the erstwhile royal family had dedicated their kingdom to the deity and pledged that they will live as servants of Padmanabha. The Shrine is run by a trust floated by the Travnacore royal house.Vast collection of gold, silver, precious stones and priceless jewelry were discovered in the cellars of the temple while preparing the inventory.''

Sankaracharya Jayendra Saraswathi of Kanchi Kamkoti Peetham pointed to the tradition of Sanatana Bharat, where the many ancient Hindu Kingdoms were operated by the King under the dictum of the Guru (Mentor-Path Finder) and as a servant of the People and People's God. The people and the King of Travnacore enriched this ancient temple as the richest Hindu Deity in this world so far.

Travancore royal family did follow the tradition to be the servant of Lord Padmanabh here. Sankaracharya of Kanchi Mutth reminded the glorious past of Hindu dynasty of King Janaka under the blessings of Saint Yagyavalkya, King Vikramaditya under the teachings of Kautilya, King Harihar and Bukku with the inspiration of Vidyaranya Swami or Chatrapati Shivaji offered everything to Devi Bhavani and Samrath Guru Ramdas Swami.

Highly revered Sankaracharya vehemently opposed the present Govt.'s attitude to denounce the Sanatana Hindu Dharma by some of its key functionaries in Congress and the tendency to grab of Hindus through an unprecedented pro-activeness for the last 10 years.

The Kanchi seer advocated in favour of keeping the unearthed near 100000 crore ($ 25 Billion) treasury as temple property under the sacred authority of Travancore royal family.

Without a shred of doubt, decedents of this Kingdom consider themselves as the servant of Lord Padmanabha and truly, they didn’t ever stash any thing out side the or in any Swiss Bank. There is hardly any doubt that alien British snatched many priceless objects from . One stone harmonium of this was transported by the British to illegally.

Globally acclaimed Kohinoor Diamond was also grabbed by the English Men near , when it was being transported to Lord Jagannath of Puri by Maharaja Ranjit Singh, after he understood the possible aggression of the British rulers all through . 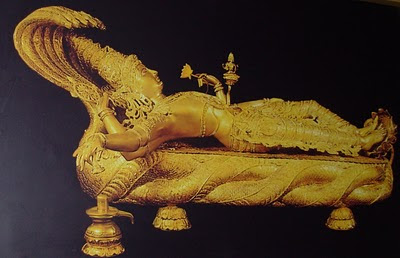