Pakistan President Asif Ali Zardari is all set to visit India, not on an official diplomatic visit but on a spiritual endeavour to visit the Ajmer Dargah. The reaction of the so called hardline Muslim janta is surprisingly calm after this news came out, which was strikingly different from the treatment meted out to controversial author and writer of the infamously famous ‘The Satanic Verses.’
There was such a hue and cry after it was announced that author Salman Rushdie will be visiting his ‘own’ country to attend the Jaipur Literature Festival, but Zardari’s visit to supposedly ‘enemy’ territory got a very lucid response. While Rushdie managed to irk some mullah’s and others with his non-conformist ideals on Islam and his expert work of fiction; Zardari is more welcome in a country that had to face the most brunt of Pakistan-sponsored extremism.
When finally Rushdie came to India to attend the Indian Today Conclave, he spoke passionately about him being barred from entering India, and commented, “This is a case of the world turned upside down. What's happening here, tonight, is what I would call 'normal'. A writer of Indian birth, who loves this country, who has spent much of his life writing about it, shows up to talk to an Indian audience about India. I would call that normal. What is abnormal is for that to be prevented. And we seem to be in danger of getting this upside down."
Zardari, on the other hand, should ideally have faced more criticism on Indian soil considering that the neighbouring Pakistan have been instrumental in carrying veiled attacks across the border, with 9/11 being the last nail in the coffin. Pakistan Prime Minister Yousuf Raza Gilani has been quoted as saying during an economic forum in China, “China's friend is our friend and China's enemy is our enemy." This statement only shows Pak’s feelings towards India and how the all-weather relationship between Pakistan and China will only spell doom for Indian in the long run. – [Read: Salman Rushdie calls off India visit after assassin threat]
On a previous unsuccessful attempt to visit India in 2008 to attend a summit organized by a capital based media group, Zardari spoke eloquently on the emotions shared by Pakistani’s and Indian’s. He said in a video conference, “There`s a little bit of India in every Pakistani and a little bit of Pakistan in every Indian. They have to settle their issues so that the coming generations live peacefully.”
But it is the political leaders that have swayed violently between what’s right and what’s not to the whims and fancies of a select few that have caused the most damage during Rushdie’s proposed visit. When Union Finance Minister Pranab Mukherjee pulled out of the India Today Conclave after coming to know that Rushdie was attending; citing that there was pressure from his constituency, Jangipur, in West Bengal that has a large Muslim population.
Omar Abdullah, CM of Jammu and Kashmir after waxing eloquently that Salman Rushdie was not unwelcome in Indian stated, “We underestimate the intelligence of Indian Muslims when we try to raise issues like this which have no bearing on a day to day concerns of Muslims. I don't believe that there are many Muslims in India for whom visa to Salman Rushdie will be an election issue.” In spite of his progressive thoughts, he too pulled out of attending the conclave attended by the controversial author conforming to hardline beliefs. Similarly, young UP CM Akhilesh Yadav also succumbed to political pressure to not meet Salman Rushdie considering that lower caste and Muslim votes were the primary reason for his stunning win in the Assembly elections and defying them will be strongly opposed.
But it remains a fact that when India boasts of its ‘tolerant’ attitude towards all evils, the aam aadmi has to face the brunt of terrorism wreaking havoc in their everyday lives. And if there is one message to the politicos out there who wants to blow up every non-issue, it is terrorism, and only terrorism that makes walking across the street or catching a metro train seem like risking your life at the hands of such violent forces and not reading a book that purportedly “incites religious intolerance”.
Courtesy:
http://news.oneindia.in/feature/2012/zardari-loved-rushdie-hated-in-secular-india.html 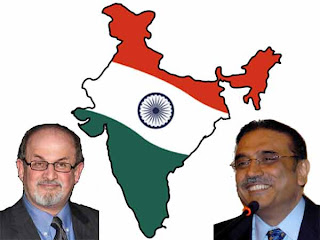