98 people from 18 Hindu families were moved from their current shelter of Thae Chaung and Thak Kay Pron camps to Sittwe city due to increased threats by Bengali Muslim extremists after many reported rapes and attempted rapes and tortures committed by the Bengali Muslims who are majority in the camp.

The transfer was carried out by two military trucks and the Hindu refugees are now living in a Hindu temple located on Mongbagree road.

An officer from Sittwe police station No (1) who do not wish to disclose his identity told RMG that 6 Hindu women including four teenage girls and two house wives were raped by Bengali Muslims during their stay in Thae Chaung camp. "We had to live in a cow butchery. They tried to feed us beef and theaten us with death if we don't convert to Islam. Our kids had to stay inside for 24 hours to avoid beating and other kind of harassment by the Bengali Muslims. The most horrible thing is that our women are being raped one after another and those Bengali Muslim rapists became more daring when the authority did not take any actions. We have to keep guards for days and nights for the safety of our people there. Those periods are really bad in our life.", a Hindu man shared about his experience in Thae Chaung camp.

The existence of Hindu people in the Bengali Muslim camp was first noticed by Ashin Virathu, a prominent monk from Mandalay's famous Ma-Soe-Yin Buddhist institute. The monk expressed his concerns about the condition and suffering of the Hindu people in the wrong place. He also requested for the relocation of those people to a suitable place in a statement issued on 20th July, 2012.

It is reported that Bengali Muslims destroyed many Hindu temples during the riot. According to reliable sources, more than 40 Hindus were beheaded and murdered by the Bengali Muslim terrorists in Sittwe, Buthidaung and Maungdaw townships. However, those Hindu victims are not included in the government's official death tolls of the communal riot. 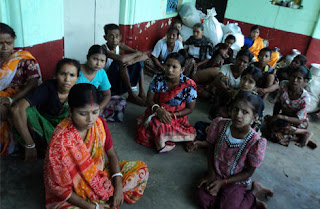 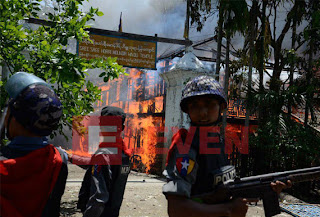 (Myanmar Police in front of a Hindu temple which was burned down by Bangladeshi Muslim immigrants)
Posted by Unknown at 7:46 AM